Mike talks about his experiences of adoption with husband Brian 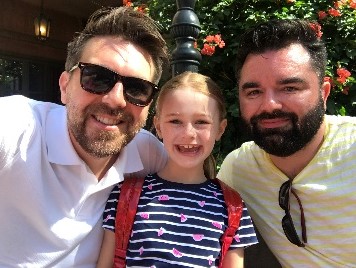 Helen Letchfield, co-founder of Parent and Professional, talked to Mike about his experiences of adopting their daughter Scarlett, and how he and his husband Brian juggled their careers at the same time.

Mike and Brian live in Leeds.  Mike works for William Hill as a Brand Manager, commuting to London weekly.  Brian used to work as a Customer Experience Consultant for Lloyds, and is now Scarlett’s main carer.

In 2009, a year after we got married, we decided we wanted to adopt.  We looked at other options, such as surrogacy, but for us adoption of a toddler felt completely the right thing to do.  Back then the process was incredibly lengthy – 4 years – we now help friends of friends through the adoption process and it has become a lot easier and quicker to get through the paperwork.

THE PROCESS DID AFFECT WORK

Every 2 weeks we had 1-3 hour-long meetings with social workers, so we did have to juggle busy work schedules.  I had a great boss who had a family member who had adopted, so she was very understanding and flexible.  She knew I would catch up with work and take my laptop home whenever I needed to.

THE PROCESS WAS CHALLENGING – AND IT DID TEST OUR COMMITMENT

In some sessions with the social workers, we found ourselves doing the strangest of things.  I remember being asked to draw with my left hand whilst answering questions (which is supposed to make you regress to a child).  It’s all to get to know you, but they literally want to know everything about you.

We had to have health and safety checks in our old Victorian home – and then make the changes as if we’d already got through and a toddler was on its way.  It felt very bizarre going around a child-free house with plastic plug-socket covers.  You’re so keen not to get a ‘black mark’ against you though, that you can’t push back on anything.

We went to workshops to meet other adopting couples.  Out of the 13 couples in our class, 4 of them were same-sex – which made us feel comfortable.  Although the whole thing was a very long, drawn-out process, it does push you and ultimately tests your commitment to being parents.

The final hurdle to get over was an interview with a panel of 15 – including professionals such as doctors, social workers and adults who had been adopted as children.  We had to answer 5 questions – I remember one being around finances, another around health, and another around what we thought the impact would be of having 2 men raise a child.  We knew we had lots of wonderful female role models in our extended families.

We had to leave the room whilst the panel made their decision…..

Eventually we were called back in and told we had been approved!

It was a bit like buying a car!  We were able to state what we were looking for and began receiving profiles almost straight away.  We had some bizarre conversations, which sometimes felt a bit brutal when we had to make certain choices.  We knew we didn’t want a baby and on a practical level, we knew that health-related conditions would have become more apparent by age 2.

The profiles sent to us were based on the child’s needs, not ours.  There were no photos at that stage.  We’ve heard that many couples have a tendency to take the first profile, but we turned down the first 4.  Then we were turned down by the social workers of the child we selected, which was unexpected.

When we received Scarlett’s profile, she sounded perfect.  It felt right.  We then received her photo and we knew she was the one.  However, the hard bit was then waiting almost 5 months for her to be officially ‘ours’.  We created a family book for Scarlett, who at the time was 2 years old.  We also sent her a Mickey Mouse toy for her birthday present.

Our transition plan was agreed and we then had to build up time together very slowly.  Thankfully we only lived an hour away from Scarlett so that did minimise disruption to work, we know that many couples have to travel for hours at time during this stage, some having to rent flats near their adoptive child’s home.  This period of transition is exciting, but it’s also time-consuming and draining.  Whilst seeing Scarlett we felt ecstatic, then we felt emotionally drained, so trying to do any work on the days we saw her was near to impossible.

We made the decision that I would take a month’s leave and Brian would take a year.  Our decision was mainly based on finances, but also on the culture of our companies.  Brian’s employer had much better benefits than mine.  As Brian was going to the be the stay-at-home partner, he got to choose what Scarlett would call us – he chose daddy and I chose Pops.

The first week was just amazing.  We stuck rigidly to the routine we were given, for example we were always both there every day when Scarlett woke up and when she went to sleep.   However, Scarlett’s foster parents had set up a routine which we felt wouldn’t work for our way of parenting in the longer term – she was put in bed at 7pm with lights out and door shut until 7am.  It didn’t feel right to us so we relaxed the rules a little.

Probably due to the relaxation of the routine, and in line with what we were expecting, Scarlett then relapsed and we had a couple of weeks of upset.  We knew Scarlett loved and trusted us but she had still lost something and we had to work hard to build that trust and connection.  So for the next 6 weeks, we had to spend every single day doing exactly the same thing, and seeing no one.  It was much harder on Brian, as I returned to work after that first month.  At week 7 we were allowed to slowly introduce grandparents.  I recall one visit to an Aquarium where Scarlett’s grandparents came with us but we weren’t able to introduce them to Scarlett, so they could see her but she didn’t see them.  It felt very bizarre.

After a month’s unpaid leave, I returned to work and my first 3 days were away in London, which was a real culture shock after been predominantly at home for 5 weeks, doing the same thing every day.  I’m an open person, so being able to talk things through at work really helped.  I also had my i-pad with me so was able to see Scarlett on Skype, which also helped.  I didn’t feel that having this time off work had any negative impact on my career whatsoever.  I have been offered more senior jobs abroad (in Gibraltar) and opportunities in London since having Scarlett and while I love my job and think of myself as fairly ambitious, the work/life balance after having a child shifted somewhat and having a safe and stable environment for her feels more important to us right now then moving to a new city for an increased salary etc. This is other reason why I’ve chosen to stay with my employer who ultimately (as the culture at work has improved dramatically over the years) have been very supportive of me being a gay dad.

However, Brian did feel like returning to work after a year out was an issue.  Although he’d worked in the company for 13-14 years, a very creative and flexible-working arrangement would be needed to accommodate the school run and work/family balance, especially with me needing to be in London a lot.  Brian took voluntary redundancy so he could be around for Scarlett.  Yes, his decision to leave was a very tough one, which did have a knock on his confidence at the time, but he has since found other ways of earning an income through property, which can be done flexibly and suits the whole family.

Another milestone!  The first day was strange – Scarlett was the only child being dropped off by 2 dads in the playground full of new parents, and I made a point of making sure our situation was noted right up front by being more vocal than usual!  Scarlett settled well – she had one period of regression around toilet-training but we knew that would happen so we were well prepared to deal with it.  We feel we’ve all been fully embraced into the community and know that people feel Scarlett is lucky to have 2 dads.

Scarlett is 9!  She loves drama and singing and is a real dare devil.  Watching her zip-wire over the Niagara Falls made me cry of course (I was terrified), but she’s happy and she’s cool with having 2 dads.  Occasionally she asks where her mum is but she has letter contact with her relatives and a great network of female role models around her.  I’m very aware that we have a good story with no real struggles – we’ve been blessed.

I’ve been with Brian for 21 years and thinking back to society's view of same sex relationships then it feels like a million years ago. I never thought back then I’d be able to be married and have a child and we’re so blessed with how normal our lives now seem to a large percentage of the world.

We are celebrating progress, not perfection with law firm Dentons, for International Women’s Day
TRAPPED: THE FINANCIAL CRISIS OF UK’S WORKING PARENTS